A Review of Borat: Absolutely Hysterical 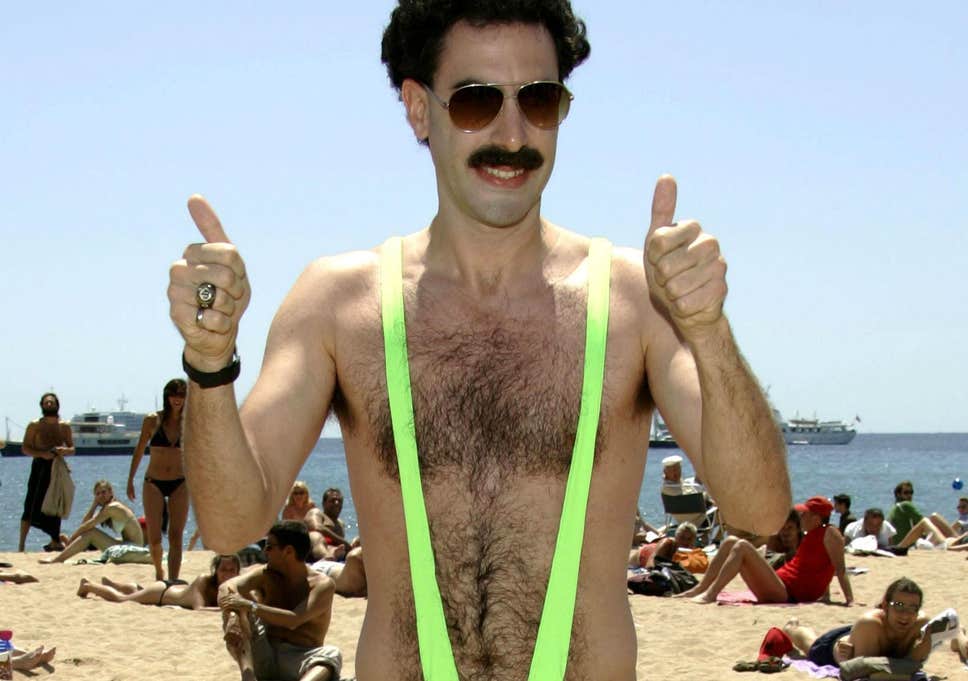 Borat…This film is like nothing you’ve ever seen before. A mock-reality adventure film which is incredibly funny and offensive at the same time, Sacha Baron-Cohen has created a character who is anti-semitic, sexist and homophobic, and who uses his narrow-minded views to show warts in all of us – Borat interacts with many Americans who may actually be more narrow-minded than him.

Cohen stars as journalist Borat Sagdiyev, who is sent to America to report on what makes the United States such a great country. He leaves his native Kazakhstan, and as he makes his way across America, we see Borat meet real, unsuspecting people, in real situations. This can only lead to hysterical consequences. Borat’s backward behavior certainly raises some eyebrows, and as the viewer, we get to witness the reactions he garners, which expose prejudices and hypocrisies in American culture. In some cases, Borat’s interview subjects embrace his outrageous views on race and sex by agreeing with him, while others attempt to offer a patriotic lesson in Western values.

The critical thing about this film, though, is that Borat is not a real person – but everyone else in the movie is. It’s like an amplified version of a hidden camera show with Borat interacting with unsuspecting people throughout America. The film that ‘Borat’ is making is the film that we get to see, so you will experience intentionally grainy handheld cinematography and hilariously bad subtitles.

Along the way, Borat meets many real, unsuspecting Americans to interview about their country – none of these people are in on the joke and what makes the film so brilliant is how this ignorant, bigoted, yet strangely lovable character (who insists women have smaller brains than men and is intensely anti-Semitic) is able to expose people’s prejudices without blinking an eye.

Some of the funniest scenes you will encounter while he watches an old episode of Baywatch and immediately becomes obsessed with Pamela Anderson, setting out on a cross-country quest to find the actress and make her his wife. He then goes to a Southern dinner party that goes incredibly awry, and a visit to a rodeo where Borat exposes the rather blood-thirsty views of the majority in attendance.

You will be watching through your fingers when you see a Texas rodeo fan talk about wanting to hang homosexuals, or drunk college students talking about how they wish they could go back to the days of slavery so they could enslave women/ It is so shockingly disturbing, but at the same time, you have to laugh.

Watching this film, it’s hard to believe what you are seeing. You get to witness Cohen say the most despicable things and his unsuspecting subjects to actually agree with him. In one scene, he even walks into a gun shop and asks which gun is best for killing Jews. Without hesitating, the shopkeeper makes a recommendation.

Borat Is Not For The Politically Correct

This film is definitely not for everyone, but its un-PC humor is what makes it work so well. Cohen and director Larry Charles make the unthinkable funny – and in the process might just get you to think about racism, bigotry, and sexism.

This film takes chances, and that’s what makes it funny when the audience are covering their mouths, wondering if they should be laughing or not; that is when you know it’s good. This film, unlike many others, does not rely on worn-out gags and bland, dumb comedy to squeeze chuckles out of audiences. Sacha Baron Cohen is fearless and has made “Borat: Cultural Learnings of America for Make Benefit Glorious Nation of Kazakhstan,” the most shocking, no-holds-barred, painfully funny comedy in years.

The character is a sly and satirical genius that is absolutely hilarious, but it does make you squirm in your seat at the same time. Sacha Baren Cohen is the king of shock comedy, but “Borat” is about more than just shock value, it is a very clever movie which exposes deep-seated hate and ignorance that still exists in America.

Cohen’s character is outrageously offensive, hysterically funny and is an equal opportunity offender. This performance and this character is an act of genius. Borat grins nervously, he is unable to comprehend anything of what he sees or hears, he is innocent but the guiltiest sort: he is boorish, he is grotesquely misogynist, he is crass, but you can’t not watch him.