A Review of Cocaine Cowboys 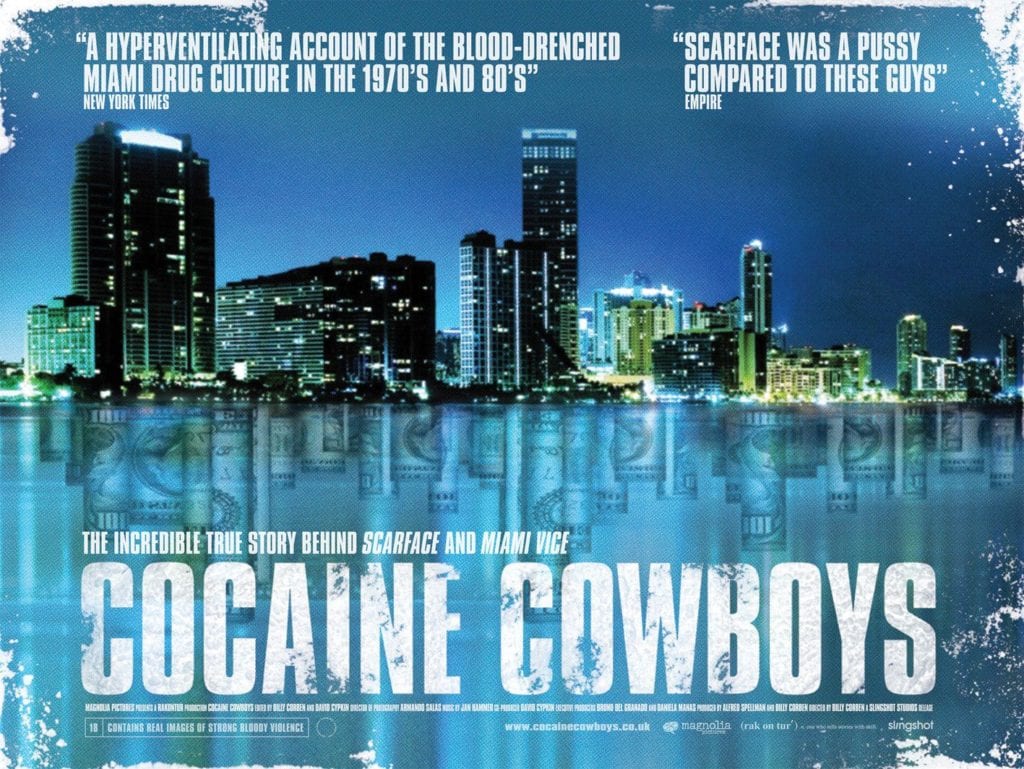 If you are a fan of crime dramas, you must see Cocaine Cowboys. It is that simple. After a 2006 limited theatrical release, it became the highest-rated documentary ever to be shown on Showtime. The New York Times called it a “hyperventilating account of the blood-drenched Miami drug culture in the 1970s and ’80s.” It has been 14 years since Rakontur, the Miami Beach-based media studio, released the documentary. With all the fanfare surrounding Netflix’s Narcos and Telemundo’s release of anything Pablo Escobar, it seems an appropriate time to look back at this timeless classic.

Rakontur, the Miami Beach-based media studio, founded by Alfred Spellman and Billy Corben, released Cocaine Cowboys in 2006. “Rakontur” is a French word for one who is skilled in relating stories. The name is appropriate as Rakontur has an impressive body of work.

The Reviews Were Good

Cocaine Cowboys went on to be Showtime’s highest-rated documentary. For better or worse, it has become a part of Miami’s history. The film documentary had such a profound effect on pop culture that the term “cocaine cowboys” become synonymous with the Miami drug trade. In 2018, the Scott Cooper Miami Project published a series on Miami’s cocaine comeback and used the phrase “cocaine cowboys back in Florida.”

Honestly, I was confused by the good (but not great reviews). It seemed that a film documentary that did such a great job of chronicling an important sphere of pop culture could have been received better. The most popular movie review site, IMDB, collected 12,000 user reviews on Cocaine Cowboys resulting in a 7.8 / 10 score.

It didn’t seem right until I checked the reviews of the 1983 film, Scarface, directed by Francis Ford Coppola and starring Al Pacino. It then started to make sense. Scarface, arguably one of the greatest crime dramas ever created, scored 8.3 out of 10 based on close to 700,000 reviews. So it seems Cocaine Cowboys is in good company and scored correctly.

Cocaine Cowboys gives us a first-person account of how the drug trade really went down in Miami. We learned how cocaine quickly overtook marijuana as the drug import of choice in the 70s and 80s. We heard how cocaine swept through Miami and the effect it had on the banking and real estate sectors. And we didn’t hear it from actors or through the twisted angle of a biased producer. We watched Jon Roberts, Mickey Munday, Jorge “Rivi” Ayala, and Al Singleton tell their stories. They were hitmen and narco-traffickers that turned government informants on Colombia’s most famous drug kingpins: Pablo Escobar and Griselda Blanco. It was the real thing.

A film documentary serves its own purpose in cinema and society at large. It is meant to educate, inform and maintain a historical record. Generally, it is not able to compete with traditional movies that celebrate reality and are designed solely for the purpose of entertainment and profit. Once you watch it, you will begin to achieve a greater cinema experience when watching future crime/drama films. You will encourage greater brain connectivity. You will develop a theory of mind that will allow you to attribute mental states to the characters and situations.

The simple fact that Cocaine Cowboys has achieved such popularity or notoriety (take your pick) is a testament to its prominence and place in cinema and documentary film making. I highly recommend Cocaine Cowboys. See it. You won’t regret it.