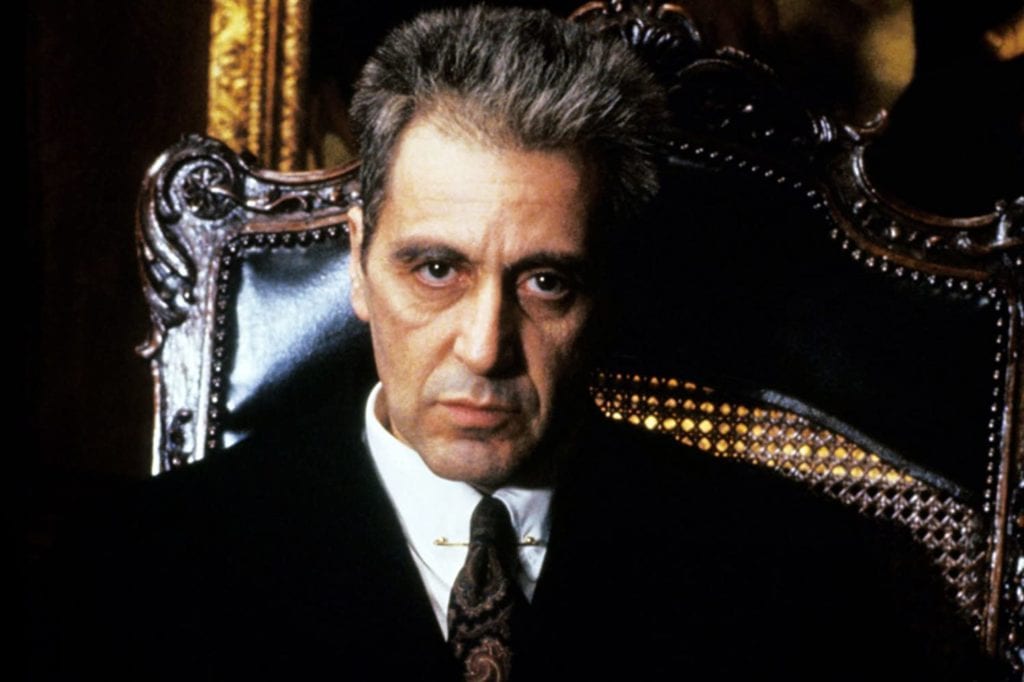 The Godfather Part III is the final installment of the epic Godfather series. Over the final years of the 20th century, film studios competed to produce the ultimate gangster movies. They gave audiences an insight into the psychotic underworld of the mafia in all its gruesome glory. The original Godfather and Godfather Part II, released in the early 1970s, came to define the genre. Both are critically acclaimed and loved almost universally.

By contrast, The Godfather Part III is a more controversial film. Separated by both time and space from the original two, the third part continues the family history of the Corleones in all its gory details. Relative to its predecessors, critics widely regard Part III as somewhat of a disappointment.

The Godfather Part III, The Story

The story begins with an older and wiser Michael Corleone, still played by Al Pacino. He now has diabetes and has spent the five years since the end of the last film trying to coax his family out of their life of crime. He sees a future in legitimate business, away from all the violence and immorality of the past. He’s tired of it.

Michael, however, is in a precarious familial predicament. On the one hand, he feels nothing but love for his daughter Mary, played by Sofia Coppola, and wants her to inherit his vast fortune when he dies. And on the other, he has to deal with Sonny’s son Vincent played by Andy Garcia, who appears hellbent on dealing death to all his enemies.

Michael wants to leave the past behind. He wants to move on from the violence and destruction. But the tentacle-like fingers of history are long, and Vincent is a thorn in his side. It presents a conundrum. Will he choose the future represented by his naive and innocent daughter, or will he return to his old ways? Is redemption possible?

Things come to a head when Vincent decides that he is going to marry Mary, and Michael’s planning starts to go wrong. Suddenly, he is in deep, and the future of his daughter is on the line.

Running parallel to this family problem is the story of Michael and the woman he loves, Kay Corleone, played by Diane Keaton. Kay probably does love Michael, but she also knows him too well. While he might be the man of her dreams, he’s also a person who stalks her nightmares too. Her skepticism is a warning for the audience. A leopard doesn’t change its spots.

The Godfather Part III is Different From Part I & II

The Godfather Part III is a very different film from the other two in a  philosophical sense. The story, concocted by Francis Ford Coppola and Mario Puzo, is a departure from the traditional gangster setup. Here you have a central figure in the Corleone family questioning whether or not a life of crime is right. Is family worth the suffering and death of so many people? Michael isn’t so sure.

Over time, the evitable force of history catches up with Michael. The old entangled webs of relationships begin to unfurl, and you get the sense that the Corleones are being pushed, inexorably, towards their fate. Once an Italian mafioso, always an Italian mafioso.

Ford Coppolla and Puzo deftly weave the real-life Vatican scandal of the late 1970s into the story, including the untimely death of Pope John Paul I and the money laundering at the Vatican bank. The purpose of these historical interludes isn’t so much to highlight real-world wrongdoing, but point out that even the holiest of people can fall. It is an apt allegory for the life of the fictional Corleones. They might shoot for virtue, but everything in the universe eventually reverts to type.

When you stand back and watch Godfather Part III in isolation, a lot of it doesn’t make sense. It appears somewhat disjointed from time to time, thanks to numerous rewritten sections and extensive editing. It is more of a smorgasbord of discrete American gangster movie scenes than a seamless piece of cinematography.

Inevitably, therefore, it relies heavily on the previous two films to fill in the gaps and give it credence. “Anyone watching Godfather Part III for the first time will struggle to make sense of what’s going on.” according to Scott Cooper Miami, the Florida-based blog. It very much depends on the first two for tying up all the loose ends and character relationships.

The film, however, remains seductive. For many film buffs, it was a walk down memory lane when released in 1990. The early parts of the film are optimistic. But then, like a giant sucking vortex, the mafia lifestyle returns, draining the morality from the characters. Michael is sad that people have to die. But perhaps not disappointed.