Home Entertainment Movies & TV The Career of Billy Bob Barnett, and What He and NFL Star... 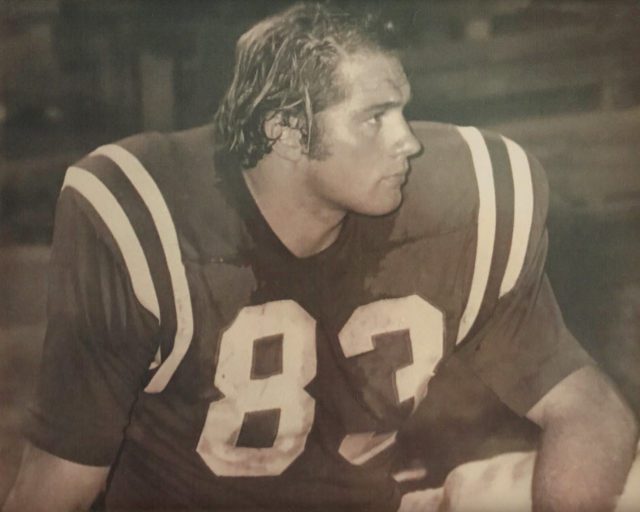 As the founder of Billy Bob’s Texas, in the historic district of the Ft. Worth Stockyards, Billy Bob Barnett has cemented his reputation in the world of Entertainment, Music, Bull Riding, and Authentic Western Culture, becoming an integral part of Texas Heritage and History. Celebrating their 40th year anniversary in 2021, Billy Bob’s Texas continues to host big names from the music worlds of Country-Western, Rock-N-Roll, Hispanic, and Blues.

But before Barnett found his career in the entertainment industry, the larger-than-life 6’5” Texan was a star athlete at Texas A&M University, lettering in both basketball and football, which in recent years has put him in famous company.

In 2005, while attending Texas A&M, sports star Martellus Bennett became the first Aggie to letter in football and basketball since Billy Bob Barnett did it in 1969. And like Martellus Bennett, Barnett also went on to play in the NFL, being drafted in the third round, 61st pick by the Kansas City Chiefs, and later going on to the Chicago Bears.

Combined with his stellar career in the entertainment industry, Barnett has significantly impacted the sports and business worlds. This article will explore his background, sports career, and business endeavors.

Barnett was born in Lampasas, Texas where his father was a rancher, horseman, and cattleman. After moving to Brenham, Tx he spent his high school years playing both basketball and football. As a Brenham Cubs Basketball athlete, he was named All-State Honors and broke the school’s all-time season record for individual scoring, after scoring 745 points in 28 games to beat the previous record of 724 points in 36 games. He averaged 26.6 points per game his senior year, during which time his coach Ike Coward won his 500th varsity victory. He also played multiple positions on the football team, including quarterback, and won honors as an all-district end.

In 1965 he was recruited by Texas A&M University. Only 2 players have ever lettered in basketball and football at Texas A&M, and Barnett was a forerunner to Martellus Bennett who later went on to play as a tight end for the Cowboys, Giants, Bears, Patriots, and Packers.

Playing under basketball coaches Shelby Metcalf and Jim Culpepper, Barnett remains a member of the 1,000-point club at Texas A&M with 1,064 career points. Barnett was frequently the team’s high scorer and was named to the Basketball All-Southwest Conference Team each year. He was an All-Tournament player in the Aggie’s Championship defeat over Seattle in 1968, and the team participated in the regional playoffs in 1969.  Texas A&M named Barnett the team’s most valuable player as a Sophomore on the Varsity team in 1967, he was Tri-Captain in’68-’69, earned 2 Southwest Conference Championships, and was ranked as one of A&M’s leading scorers in 1966, 1968, and 1969. Barnett was an aggressive player who often made headlines, most notably in an A&M home game against Baylor where a Baylor player who had committed a hard foul was then he himself taken down hard, knocking him unconscious and resulting in a riot on the basketball court with the A&M fans all joining in.

Playing under coach Gene Stallings, during his A&M football career Barnett was a stand-out player with grit and determination. Barnett received his varsity letter in football in 1969 and was later honored as a member of the Texas A&M Lettermen’s Association. He played football when Texas Governor Rick Perry was a yell leader at Texas A&M, and the two remain friends today.

Barnett was the 61st pick in the NFL draft by the Kansas City Chiefs and later went on to the Chicago Bears during which time he and the team were in the movie Bryan’s Song. Barnett’s football career ended early due to an injury.

After the NFL, Barnett decided to use the business management skills he learned at Texas A&M to become an entrepreneur. He opened The Bucket in Austin, Texas, and the Silver Dollar in College Station, Texas, both popular entertainment facilities. The Bucket went on to become the largest Budweiser account in the college distribution system in the U.S.

From ’75 to ’80 Barnett owned and operated the Miller and Lone Star beer distributorships for the Dallas/Ft. Worth region. Serving as Chairman and CEO for 5 years, under his leadership Lone Star introduced the long-neck bottle to Dallas, increasing sales from 5,000 to 70,000 cases over the first year. As a result of his success, the distributorships generated some of the highest sales of Miller Lite in the U.S.

Barnett’s dream of owning the world’s largest honky-tonk bar and entertainment center became a reality when he and his partner founded his namesake,        Billy Bob’s Texas, on April 1, 1981, with Willie Nelson, Waylon Jennings, and The Gatlin Brothers playing the opening weekend. Under his leadership, with live music on 2 stages, live bull riding, restaurants, and retail, it was the number one liquor tax generator in the State of Texas.

Celebrating their 40th year anniversary in 2021, bands such as Alabama, Hank Williams Jr, Toby Keith, Miranda Lambert, ZZ Top, Tina Turner, B.B. King, the Doobie Brothers, Chuck Berry, Bob Hope, George Jones (who Barnett briefly managed) and most recently Kid Rock have all graced the stage. Among the stars who have received their big break at Billy Bob’s include Garth Brooks, Alan Jackson, Reba McIntyre, and George Strait, who was originally the house band. Billy Bob’s has also hosted many Hollywood Movies and T.V. shows including “Over the Top” with Sylvester Stallone, “Baja Oklahoma” with Willie Nelson, “Pure Country” with George Strait, “Walker Texas Ranger” with Chuck Norris, “Dallas” with Larry Hagman as J.R. Ewing, and Brett Michael’s” Rock of Love”. Billy Bob’s Texas has been voted “Nightclub of the Year” 12 times by the Academy of Country Music, named “Venue of the Year” 8 times by the Country Music Association, named one of the “10 great places to Forge Fun” by USA Today, and named one of the “Best 8 U.S. Music Experiences” in European Weekly’s 50th Anniversary Edition. Although he no longer owns the club, many of the original operating team members are still in place and the concept and great traditions have continued to this day.

Development of the Fort Worth Stockyards

Barnett acquired the Historic Stockyards area of Ft. Worth from a New York City Corporation in 1983 and was instrumental in helping to develop this area into the vibrant hub it is today. The Stockyards Hotel at that time was known as The Right Hotel, and where the workforce workers were housed, so Barnett rented the hotel and hired everyone. He was also able to work with then U.S. Speaker of the House Jim Wright and assist in bringing in $100 Million in federal funding to preserve and secure the Stockyards for future generations to come.

The Historic Stockyards is an entertainment, shopping, and dining destination with traditional Texas events like rodeos and livestock events. Millions of tourists and local residents have visited the Stockyards, and due in large part to its success over the years as well as a recent $175 Million investment in expansion and renovation, with another $50 Million on the way, Travel + Leisure Magazine recently named Ft. Worth at position #15 of the top 50 U.S. destinations above Las Vegas, Los Angeles, New Orleans, and Hawaii.

Barnett continued to be an important force in the entertainment industry across the South when in 1989 he and his partner opened The Cat’s Meow located on Bourbon Street in the heart of the Historic French Quarter district of New Orleans. Within the first year, The Cat’s Meow became the largest Miller and Budweiser account in New Orleans, and today remains one of the nation’s most popular and profitable tourist destinations. The Cat’s Meow is also the original home of the “3 for 1” drink concept in New Orleans, conceived by Mr. Barnett. Now open for almost 35 years, The Cat’s Meow has kept the title of “The Best Karaoke Bar in the World” by Pioneer, which brought the phenomenon to the U.S.

The Cat’s Meow has attracted many musicians and stars to its stage over the years including Seal, Brooks N Dunn, Miley Cyrus, Depeche mode, N’Sync, Bill Gates, Tori Spelling, and Charles Barkley, and has provided on-site filming for shows such as “The Regis and Kelley Show” and MTV’s “Road Rules”

Barnett currently uses his skills in the entertainment industry and navigating the Legislative process to consult for other venue owners across the United States, including, working with casinos and gaming operations in Las Vegas and Louisiana, airports, architects, owners of professional sports teams, entertainment establishments, and helping to solve the low-income housing problem.

Barnett’s career may have begun in the sporting world, but he has made an indelible mark on the entertainment industry and western culture in Texas, the USA, and across the globe. Like Martellus Bennett, he started his career as a standout two-sport athlete at Texas A&M University, but his legacy will remain an influential part of the business world for years to come. In 2017, Billy Bob Barnett was inducted into the Texas Trail of Fame and has his “Founder of Billy Bob’s Texas” star on the sidewalk next to the front entrance of Billy Bob’s Texas