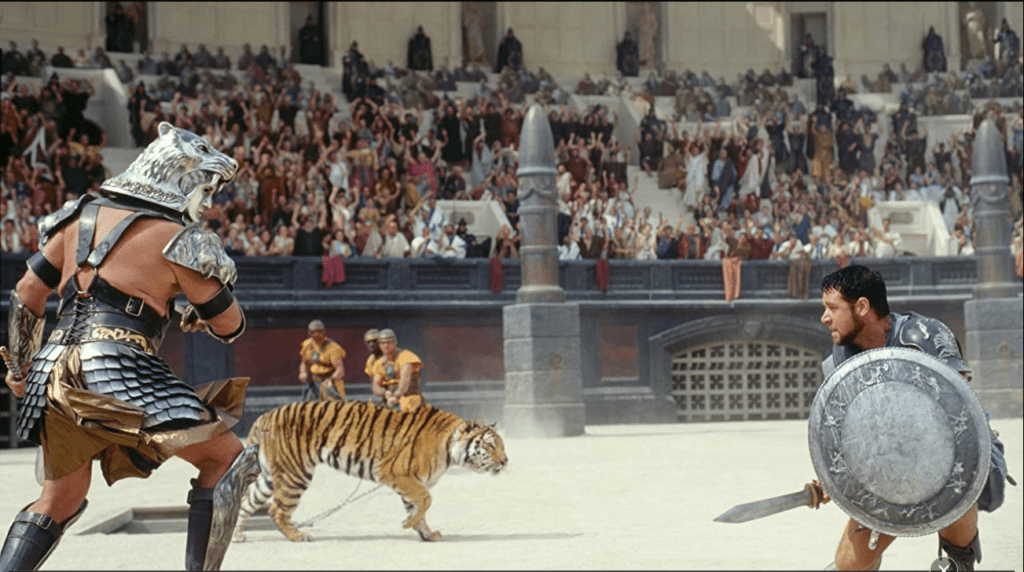 Gladiator is an American historical epic film that was released in 2000 and directed by Ridley Scott. Russell Crowe starred as the main character. This film won critical accolades, and five Academy Awards and was appreciated by audiences at large.

The film is set in 180 AD and is partially based on true events. The Roman forces were led by General Maximus, played by Russel Crowe, and they easily defeat the Germanic tribes in one final battle. This victory promises peace within the Roman Empire, but this peace was short-lived. The emperor, Marcus Aurelius, is played by Richard Harris. Marcus tells Maximus that he would like to be succeeded by Maximus after his death and that Maximus should return power to the Senate, thus restoring the Roman Republic. Marcus is against the ruling of his son, Commodus, played by Joaquin Phoenix, as he is not a moral man.

Emperor Marcus tells his arrogant son Commodus about this plan but Commodus is enraged and proceeds to kill his father, the emperor, and then lies about it. Maximus has a feeling that Marcus’s death wasn’t natural, but before he could gather his troops to seek justice against Commodus, he is arrested by Commodus’s men. The new emperor Commodus sends out an order for the death of Maximus and his family.

Maximus manages to escape to go to his home in Spain, but upon reaching there he finds out his wife and son have already been killed and his house had been burned down. He buries his family and faints from the trauma. A slave trader then takes Maximus to North Africa, where the gladiator, Proximo, played by Oliver Reed, purchases him.

Initially, Maximus refuses to fight during the training session and just stands there. The viewers’ impression is that he is hoping to get killed during training so the misery of living without his family would end. But once he enters the arena, all that changes and he defends himself and wins.

Proximo and his troupe don’t know Maximus’s real name and only know him as the Spaniard. He soon becomes a top gladiator under this name. Commodus pretends to care about the people when all he cares about is power. Lucilla, Commodus’s sister played by Connie Nielson has a rough idea of what happened to her father and works as an intermediary between Commodus and the senators.

Commodus decides to host a gladiatorial spectacle in Rome in honor of his father to consolidate power. Proximo brings forth his best gladiators to participate in this spectacle.

The first fight was supposed to be a reenactment of the battle of Carthage and Maximus leads them to victory in it even though they were supposed to be the losers. The crowd cheers him on. Maximus defeats the Roman gladiator in one-on-one combat and then reveals his true identity to Commodus who comes down to congratulate him on his victory. The two have a strange confrontation where Commodus is shocked to see Maximus, and Maximus promises revenge. Commodus’s sister, Lucilla sees Maximus’s return as a ray of hope and secretly visits him at night to talk to him. However, Maximus avoids her because he thinks she is on Commodus’s side. She wants him to meet a senator, but he refuses as he is not interested in what she has planned, neither does he want to help Rome.

In the next scene, Maximus is in the arena fighting off four tigers and a famous gladiator who has come out of retirement. Once again, Maximus wins. Commodus meets him again and tries to instigate him by gloating over the death of Maximus’s wife and son, but Maximus does not get angry. He can’t just kill Maxims so he plots other ways to pull it off. He gets so paranoid that he has all his senators followed to ensure they are all on his side.

Senator Gracchus played by Derek Jacobi, decides to help Maximus escape so he can gather his army and defeat Commodus. Proximo refuses to help Maximus as he thinks the plan will fail because of how evil and aware Commodus is. Gracchus is arrested soon and Lucilla visits Maximus to tell him to execute the plan immediately as Commodus is figuring out the plan.

Commodus threatens Lucilla that he will kill all those she holds close if she doesn’t tell him what is going on. Lucilla gets scared and tells him everything. Meanwhile, Proximo decides to support Maximus and assists him in his escape. But the Roman praetorians kill Proximo and the other gladiators that were helping him and capture Maximus once again. Commodus announces he would meet Maximus alone in the area for combat, but before that, he stabs Maximus and weakens him. Maximus kills Commodus in the arena, announces the restoration of republican rule and reinstatement of Senator Gracchus, and then dies himself.

Since the mid-1960s, this film might be the first sword-and-sandals epic film that sparked an interest in films about ancient history once again. After this film, Crowe got a reputation for being difficult to work with, but he won an Oscar and plaudits for his impeccable performance. Oliver Reed unexpectedly died during the movie’s production, and the script was edited for this reason. This also explains the digital manipulation that went into the movie’s production.

DreamWorks, Scott Free Productions, and Universal Pictures were the studios involved in the production of this film. Directed by Ridley Scott, John Logan, William Nicholson, and David Franzoni were the writers while the music was supervised by Hans Zimmer and Lisa Gerrard.