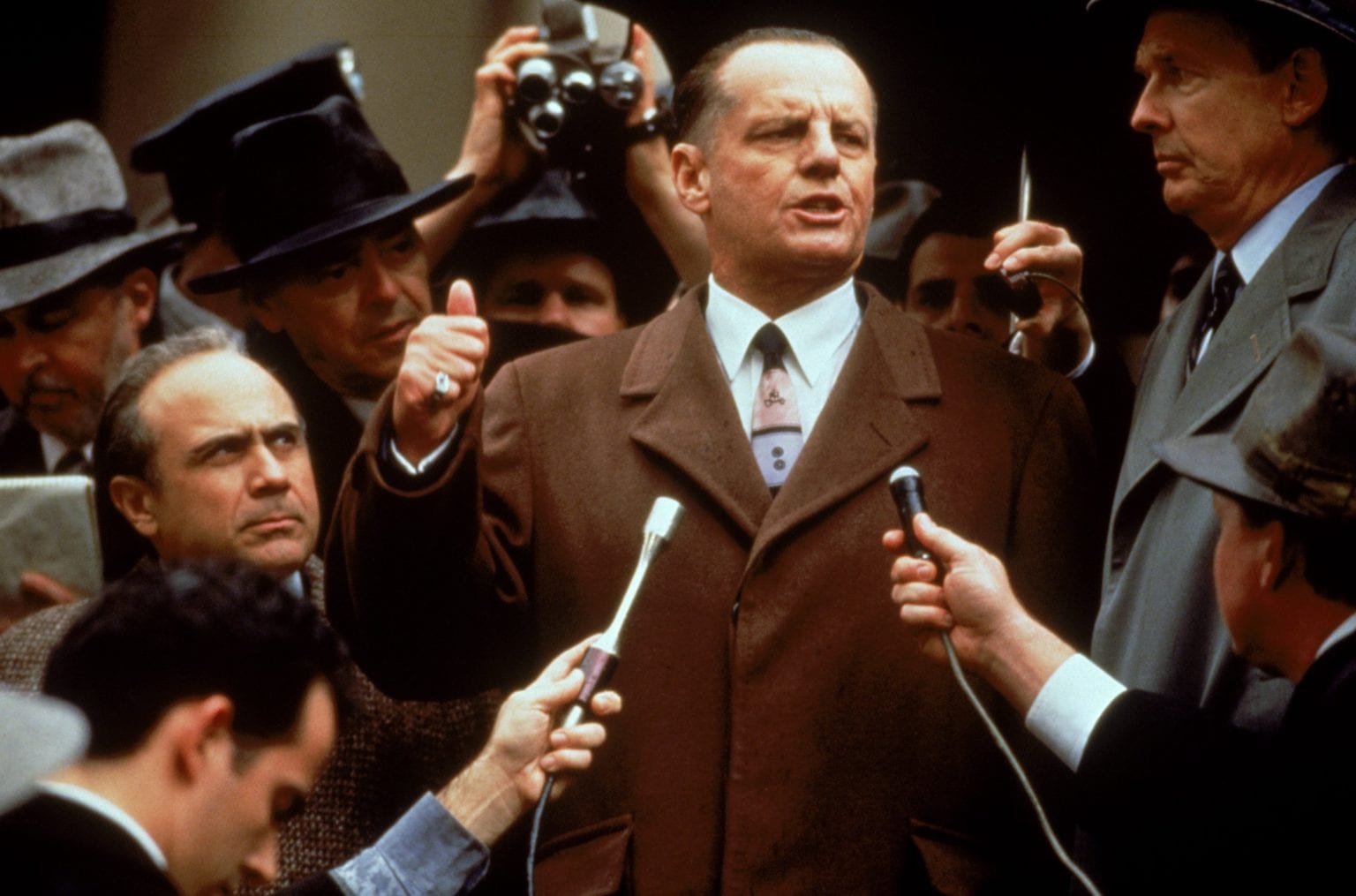 In this biographical drama, the film follows the legendary Teamster boss and union leader, Jimmy Hoffa, whose mysterious disappearance has never been explained.

Spanning over four decades, the film chronicles Hoffa’s life from 1935, where we see Hoffa pitching the benefits of joining the Teamsters to a truck driver named Ciaro, who ends up becoming his right-hand man.

During a bitter strike, Hoffa is taken to the local Mafia boss and is introduced to Carol D’Allesandro, where an alliance is formed. Rising through the ranks, we witness Hoffa’s shady and illegal activities when he becomes president of the International Brotherhood of Teamsters. Suspicions are aroused, and Hoffa is questioned by Robert F. Kennedy during a Congressional hearing, sparking a long and bitter feud that continues even once John F. Kennedy is elected president.

When Hoffa is betrayed by a junior associate, exposing a plan to exploit the union’s pension fund, he gets sent to serve time in a Pennsylvania prison alongside Ciaro. Once he gets out, he expects to be the boss of the Teamsters once more but learns that, due to his release conditions, he cannot run the union for at least another ten years. Angered and frustrated, he meets with D’Allesandro demanding that he be reinstated as president and threatens to go to the press, exposing the mob’s involvement.

Did you know? The character of Hoffa is one of Jack Nicholson’s favorite roles? It had also been seventeen years since Hoffa disappeared when the film was released.

The editing and sound design are equal parts sharp and stylish. With a big and brassy soundtrack, the film allows the audience to go back to a time of old school Hollywood cinema.

The film also uses editing devices, such as dissolves between scenes, and has some elaborate camera moves, providing the perfect look and tone for the film but with a contemporary twist. Even though the film was made in 1992, it’s editing makes sure that it doesn’t feel aged and could just as easily be a crime film that has only just been released.

Shot in various locations across the US, the set has that classy and smooth old-style American feel to it that we usually find in the classic organised crime genre, while the impressive visuals really allow the audience to be pulled in.

Jack Nicholson is fantastic in the lead role of Jimmy Hoffa and is definitely the main impressive highlight. He is a perfect cast for Hoffa, made all the more remarkable considering that this isn’t a fictionalized character. Once you’ve seen the film, you can’t imagine the role being played by anyone else. In fact, his likeness to the real Hoffa is so similar, that the only major extra makeup that Nicholson required every time he stepped into Hoffa’s shoes was a set of false upper teeth and a fake nose.

Directed by Danny DeVito, he does a great job also playing Jimmy’s fictional, loyal-to-the-end right-hand man Bobby Ciaro, leaving us almost feeling sorry for him and his grisly end. His convincing performance allows us as the audience to be placed in Bobby’s shoes, with us continually observing Hoffa and his actions as he negotiates with the mob and leads the union.

While not an action film, there are some pretty violent action scenes throughout, including the labor riot, an accidental explosion leading to one of the supporting characters completely catching fire, and the actual assassination scene itself. All violent scenes are realistic and used to drive the story forward, while also being an accurate representation of mob-related violence.

Anyone familiar with the story of Hoffa will know that it doesn’t have a happy ending. Even though exactly what happened is still a mystery even today, the finale does a good job of putting together a realistic version of what could have happened in real life. Angered by Hoffa’s threat of going to the press, D’Alessandro and the mob set a plan in action that results in both Hoffa and Ciaro’s disappearances. In real life, we know that Hoffa was never seen alive again, which makes the finale all the more haunting for the audience, creating a more powerful impact.

Hoffa is an ambitious biopic, which realistically portrays the violence that ultimately comes from being connected to the mob and explores the themes of the use and abuse of power, and the betrayals that come with it.

While the film paints a fascinating but complex portrait of an angry and power-hungry man, it unfortunately never quite gets to the core of Hoffa’s character and psyche. This leaves Hoffa as much of an enigma as he was at the beginning, and results in the audience still not fully understanding him, after nearly two and a half hours. While this ultimate lack of insight leads the film to fall short, it is an entertaining and informative biopic nonetheless, that offers some truths to the myth and legend. Despite not being a box office hit, it is a great and classy watch, particularly for fans of the organized film genre.