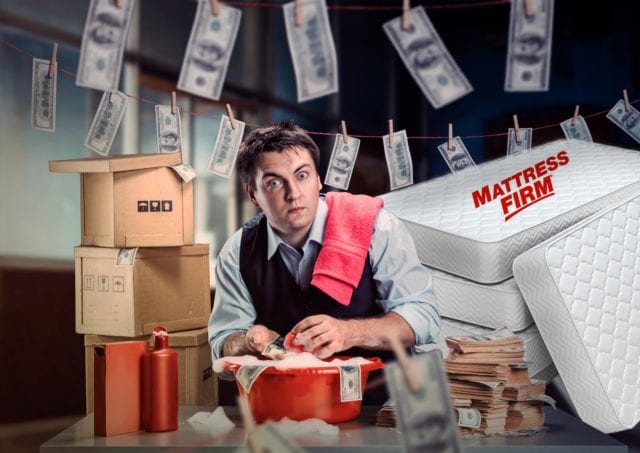 Mattress Firm is a store that you’ve probably heard of and seen quite often if you live in the US. There are over 2,500 Mattress Firm stores in 49 states, so that’s why you’re sick of seeing them everywhere.

However, there is a conspiracy theory around the stores and their ubiquity. While other conspiracy theories tend to center on money laundering schemes or political corruption, this one is decidedly different.

A question posted on r/AskReddit: “What conspiracy theory do you 100% buy into and why?”, solicited this response:

“Mattress firm is some sort of giant money-laundering scheme. They are fucking everywhere and always empty. I remember seeing 4 mattress firms all on each corner of an intersection once, there is no way there is such a demand for mattresses

edit: a few people seem confused, I’m talking about multiple of the SAME mattress store all in close proximity to each other, not different mattress companies. Like if there were 4 different companies all next to each other I get that but these are the same company. Edit3: rule 4 for the link sorry boys”

So why are there so many of these Mattress Firm stores popping up? What does it have to do with their parent company and an ongoing criminal investigation? Let’s put on our tin foil hats, follow the bread crumbs and see how deep the proverbial rabbit hole goes.

According to Seth Basham, employee of investment firm Wedbush, having multiple stores in close proximity is a good business strategy. He has spent a lot of time talking to people in the mattress industry. So he thinks he knows why it’s smart to position so many stores together.

When you walk or drive on to the street, they want you to see their store at first glance. In fact, they want to be your only choice for a mattress purchase. That’s why; their aggressive buy out strategy has resulted in so many stores being opened on every block.

Mattress Firm has bought out several regional chains of several mattress sellers. The cost of keeping the lights on and paying employees at Mattress Firm stores isn’t as much as you’d think. The business is pretty straightforward and you don’t need as many employees as, say a restaurant, or a gas station.

The company’s biggest acquisition has been Sleepy’s in 2015. After that buyout, they controlled more than a quarter of the mattress sales in the nation. However, it didn’t pan out for them the way they wanted.

However, all that doesn’t lend credence to the conspiracy theory; it just provides a rational explanation.

You buy mattresses maybe every 10 years. They cost a lot, but they last for very long. That’s why they have huge markups; nearly 50% for most stores. According to Michael Magnuson, who runs GoodBed, 50% is the approximate number.

Mattress Firm stores do the same because they understand buying mattresses isn’t considered exciting. It’s not something you can post on Instagram or Snapchat about. However, since it costs so much, you also don’t want to get a bad deal.

So Mattress Firm uses shady tactics like declaring a huge sale and artificially inflates prices only to discount them. That tactic works since people love spending half price on something that was previously selling for 100%.

However, you’ll find those kinds of tactics every time any big sale comes around. Amazon, Alibaba, Walmart, Newegg, etc. are all guilty of that kind of artificial price manipulation. That doesn’t make Mattress Firm stores unique, but it also doesn’t make them the good guys.

What they’re doing can’t be classified as money laundering; but just because it’s not illegal, it’s not justified either.

Mattress Firm stores are all owned by Steinhoff International. They’re the second-largest furniture retail company behind IKEA. Hence, they’re well equipped to handle the expansion of their brand. However, that’s not all. They’re involved in an ongoing criminal investigation.

The investigation doesn’t relate to any charges of money laundering. However, the truth is actually more interesting.

James-Brent Styne has been writing about Steinhoff International for many years. He says they’ve been operating since 1996, long before the Mattress Firm Stores, and are headquartered in South Africa.

When Steinhoff was one of the biggest companies on the Johannesburg Stock Exchange, they employed 50,000 people in South Africa. Their execs were known to spend extravagantly on yachts, wines, and cars. No one batted an eyelid until Markus Jooste, former CEO, resigned suddenly in December, 2017.

Now it turns out that Steinhoff may have been concealing financial irregularities for years. South Africa’s police are now investigating alleged fraud. Moreover, probes are being conducted by regulators and investigators from around the world to hold the company accountable.

Internal audits are also going on, and questions about unpaid taxes are being asked. No one knows the full story. How does Mattress Firm fit in? Steinhoff bought the company for $2.4 billion in 2016; twice what it was worth.

Soon after Jooste had a falling out with Tempur Sealy, major supplier for Mattress Firm. That hurt the sales of both companies. Now, Sealy is suing Mattress Firm for allegedly aping their product, the “Tempur-Pedic” mattress.

While all of this sounds very interesting, it’s certainly not a conspiracy. It looks like a company is just trying to salvage itself after several bad business decisions.