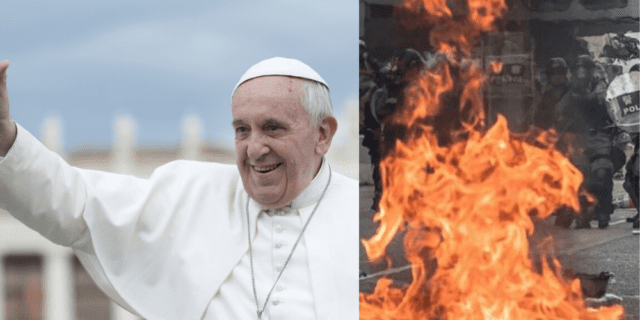 In Pope Francis’ seventh Christmas as pope, the Christmas message from St. Peter’s Basilica at the Vatican was heard loud and clear all over the world. Almost everywhere. The Christmas message was for hope and kindness to others. The pontiff focused on the suffering of migrants throughout Europe, prayed for those who are victims of religious persecution, and for peace in global hot spots like North Korea.

“May Christ bring his light to the many children suffering from war and conflicts in the Middle East and in various countries of the world,” said Pope Francis “It is injustice that makes them cross deserts and seas that become cemeteries.”

Close to 6,000 miles away in Hong Kong, the pro-democracy, anti-government protesters clashed with police throughout the city. The police officers used tear gas, pepper spray and water cannons on the protesters, forty percent of who were students. The students were charged with unlawful assembly, rioting, assault, and arson.

“Hong Kong witnessed truly outrageous police brutality on Christmas Eve. Are Hong Kongers now not even allowed to gather to celebrate Christmas peacefully, to shop and sing carols? The level of violence in Hong Kong has reached such severe and sustained levels that an international, independent inquiry should be urgently established.”

Pope Francis has generally avoided issues that would offend Beijing. The Vatican has not had official diplomatic relations with Beijing since 1951. Vatican City is still one of the few nations of the world that recognize Taiwan and is the only European nation that has formal diplomatic ties to Taipei. Although in September of 2018, Vatican-China relations cooled as an agreement was signed that allowed the Pope to override the Communist Party’s appointment of bishops.

In the past and as recent as last month, the pontiff downplayed the protests in Hong Kong and avoided taking any official position. The pope declared “I would like to go to Beijing. I love China.”

Pope Francis has yet to issue a formal statement regarding the violence that erupted during the Hong Kong Christmas. However, according to an anonymous expert source on Vatican diplomatic affairs, “It is unlikely that the Vatican will do very little or anything at all to antagonize Beijing at this time.”