Who Was Robert Maxwell?

Ian Robert Maxwell MC was born on 10 June 1923. His birth name was Ján Ludvík Hyman Binyamin Hoch, and he was a British MP, media proprietor, and fraudster. Maxwell was originally from Czechoslovakia and during his life he built himself up from a life of poverty to extreme financial success. After his death in 1991, it was found that his companies had been incredibly fraudulent, including misappropriation of his Mirror Group Pension fund. His daughter, Ghislaine Maxwell, was the girlfriend of convicted sex offender Jeffrey Epstein.

As a young man, Maxwell was able to escape Nazi occupation in World War II and was decorated as a hero for his efforts in the British Army. After the war, he worked in publishing and helped to secure Pergamon Press as a household name. He spent the 1960’s as an MP, and after 6 years of this, he went back into media and bought the British Printing Corporation, Mirror Group Newspapers, and Macmillan Publishers. He also bought some other publishing companies to add to his repertoire.

Maxwell lived a very luxurious life and he would often fly in his own helicopter, lived in the huge Headington Hill Hall in Oxford, and sailed his yacht, the Lady Ghislaine named after his daughter. He was often seen as a controversial figure, especially due to his support of Israel during the Arab-Israel war in 1948. He lived such as lavish lifestyle that he did go into debt, and in 1989 he had to sell Pergamon Press as well as other businesses to cover it. In 1991 his body was found in the Atlantic Ocean. He had fallen from his yacht, the Lady Ghislaine. His body was laid to rest in Jerusalem.

After Robert Maxwell died, banks called in loans from his businesses and this caused the collapse of his entire empire. His sons tried to keep the businesses afloat however they had no success because Maxwell’s fraudulent activities were discovered, revealing that he has stolen hundreds of millions of pounds from his company’s pension funds.

Although Maxwell was seen as a real help in the war for the British, he also has an affiliation with Israel. John Loftus and Mark Aaron’s both described Maxwell having contacts with Czechoslovak Communist leaders in 1948. His actions were instrumental in Czechoslovak’s decision to arm Israel in the Arab-Israel war. He was discovered to have smuggled aircraft parts into Israel to help their war effort, and this led to Israel gaining an aerial lead.

Was Robert Maxwell a Spy for the Mossad?

Maxwell was suspected to be a secret agent for the foreign government by The British Foreign Office, and they even stated he was “a thoroughly bad character and almost certainly financed by Russia.” He had links to MI6, the KGB, and Mossad (Israel intelligence). Many heads of Israel intelligence attended his funeral and the Prime Minister was quoted saying “He has done more for Israel than can today be said.”

Ari Ben-Menashe was a former member of Israel’s Intelligence and he approached a news company in Britain shortly after Robert Maxwell died. He stated that Maxwell and Nicholas Davis (Daily Mirror’s foreign editor) were both agents of Mossad. He also said that in 1986 Maxwell told the Israeli Embassy in London that Mordechai Vanunu had given away information about the nuclear capacity in Israel to The Sunday Times and The Daily Mirror. As a consequence of this, Mordechai Vanunu was kidnapped by Mossad and imprisoned in Israel for treason.

At first, these allegations against Maxwell were ignored, however, a journalist from The New Yorker called Seymour Hersh reported a few of the allegations during a press conference in London. On 21 October 1991, MPs George Galloway and Rupert Allason agreed to raise the issue in the House of Commons and this allowed journalists to publish the story without fear of lawsuits. Maxwell called these claims “ludicrous, a total invention” and Davies was fired. The following year after Maxwell’s death, Galloway referred to Robert Maxwell as “one of the worst criminals of the century.”

In 1969 the head of the “Leasco Data Processing Corporation” Saul Steinberg was looking to acquire Pergamon. Steinberg says that during negotiations Maxwell falsely stated that a subsidiary of the company responsible for publishing encyclopedias was very profitable, which was not the case. Pergamon was forced to reduce its profit forecast from £2.5 million to £2.05 million in 1969. The dealing of shares was suspended on the London stock market.

Maxwell lost control of Pergamon after this and was expelled from the board in October of 1969. Steinberg purchased Pergamon after this. The Department of Trade and Industry stated: “We regret having to conclude that, notwithstanding Mr. Maxwell’s acknowledged abilities and energy, he is not in our opinion a person who can be relied on to exercise proper stewardship of a publicly quoted company.”

In 1974, Maxwell managed to reacquire Pergamon after borrowing funds.

In 1984 Maxwell bought the Mirror Group which published 6 popular British newspapers. This led to a media war between himself and Rupert Murdoch. During a meeting of the Mirror Group where Maxwell met new employees, journalist Joe Haines stated that Maxwell “is a crook and a liar”. However later on, he came under Maxwell’s influence and eventually went on to write Maxwell’s autobiography.

In 1985 Maxwell took over Sinclair Research, which was Clive Sinclair’s computer company, however the deal fell through in August of 1985. By 1988 Maxwell owned many companies including the Mirror Group, Pergamon Press, Nimbus Records, Macmillan Publishers, Maxwell Directories, and Prentice-Hall Information Services.

The Suspicious Death of Robert Maxwell

On 5 November 1991, Maxwell was on his yacht, the Lady Ghislaine. He was last in contact with his crew at 4:25am. He was presumed to have fallen overboard. The yacht was cruising around the Canary Islands. Later that morning his body was found floating in the middle of the Atlantic Ocean, and it was taken to Las Palmas. It was found that he had suffered a heart attack and accidental drowning, however 3 pathologists disagreed about his cause of death. Murder was ruled out and it was seen as a suicide.

Jeffrey Epstein, a convicted sex offender who commit suicide in prison, was dating Maxwell’s daughter, Ghislaine. According to Epstein: Dead Men Tell No Tales, Ghislaine Maxwell and Jeffrey Epstein ran a “honey-trap” operation in which they provided young girls to prominent politicians from around the world for sex and then used the incidents to blackmail them in order to attain information for Israeli intelligence. The author, Ari Ben-Menashe, also claims he was the intelligence handler for Robert Maxwell, also an Israeli spy. 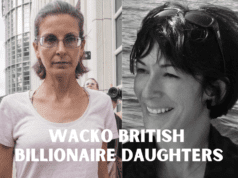 What The Hell is Wrong With The Daughters of British Billionaires?