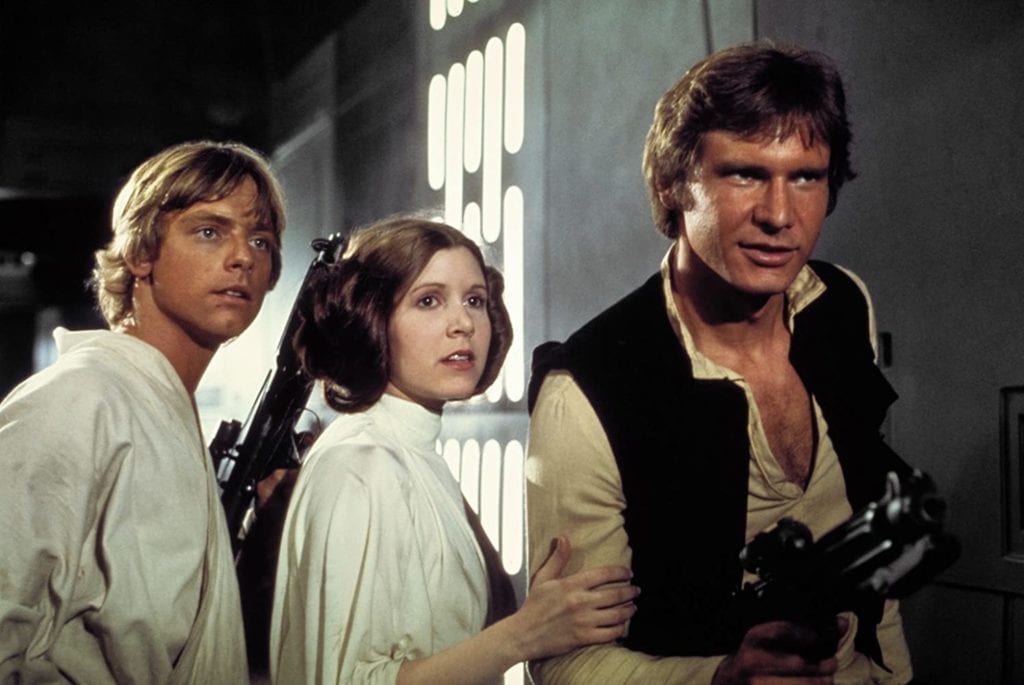 Did you know? George Lucas cited the Legend of King Arthur as one of his inspirations behind Star Wars.

Star Wars: Episode IV – A New Hope, is without question one of the greatest cinema feats ever made. There’s a reason people went to the cinema to see it more times than you could count on your fingers when it was first released, and people still love it to this day.

Star Wars is a modern tale of mythic adventure and excitement. It follows the journey and growth of Luke Skywalker, our protagonist. In this particular film, Princess Leia, portrayed by the wonderful Carrie Fisher, is held hostage by the evil Imperial forces in their effort to take over the Galactic Empire.

Luke Skywalker, portrayed by Mark Hamill, and Captain Han Solo, portrayed by Harrison Ford, team up alongside everyone’s favorite robotic duo, R2-D2 and C-3PO. Their aim is to rescue the princess and restore justice to the Empire.

This film is a fairytale wrapped up as SciFi and was an obsession for most men under 25 at the time it came out. The film as a whole rewrote the cinema handbook for this type of movie. This is one film you can say completely revolutionized cinema – it was an instant hit with cinema-goers and critics alike.

Many agree that the only real fault with Star Wars is that its story has a few too many subplots. This can make it difficult to follow and can take away from the main storyline at times. In spite of that, each scene is detail-rich and the character development and dialogue make up for it. The conclusion is truly epic.

Ford is a charismatic personality and portrayed Han with a professionalism that you may not have expected at the time from somebody with his acting portfolio (although this really boosted his career). Sir Alec Guinness’s casting was precise and excellent in his part as Obi-Wan and is a joy to watch.

Carrie Fisher portrayed Leia in a way that earned her millions of fans, and many have tried to emulate since. She certainly wasn’t the whining, whimpering type and was capable of far more than being saved by a dashing hero. She was bold, brazen, and sophisticated all at once. She was totally aware of her surroundings and was more than capable of defending herself.

Mark Hamil was another perfect casting as the whining little boy who wanted more but was too afraid to reach for it. Over the film installments, we see him grow, and he manages to endear the audience to him all the more with each one.

As a character, Darth Vader is potentially one of the coolest bad guys, and it’s even more interesting that most people begin to feel empathy for him – in spite of the fact that he’s evil. His voice is so scary that it could be a good idea to make sure it’s a good idea to let your kids watch the film, lest they have nightmares. The story and the characters are original and compelling. Even the robot characters have their own unique personalities.

The visual composition is authentic and gives the movie a powerful aesthetic value. One such scene that is a good example of this is the Binary Sunset scene. You get a clear picture of the world the story is set in with this, and you see for yourself how well it develops Luke’s character. As he looks toward the horizon, his sense of longing for something more is palpable.

The musical score by John Williams featured in this film helps make it the masterpiece that it is, and was definitely a contributing factor to its success.

The effects were, in 1977, absolutely incredible for the era. Extremely creative and ahead of their time, they help to secure the movie’s success not only upon its release, but for the next 40 years.

Some say this is just a ‘fun’ movie, while others insist that ‘The Force’ is a metaphor for the psychic abilities with which we are all born. Some think it’s a metaphor for hope and faith, dedication and commitment to the greater state of being. The Empire may have been a metaphor for the Germanic Nazi “storm troopers’ and the Rebellion is said to have been symbolic of the NATO forces who defeated them. Whatever you think this movie is about, there’s no denying that it’s the movie that changed it all.

Have You Read CHEVY CHASE: THE FUNNIEST MAN IN AMERICA