A Review of The Patriot: A Mel Gibson Racist Whitewash That Ignored Slavery 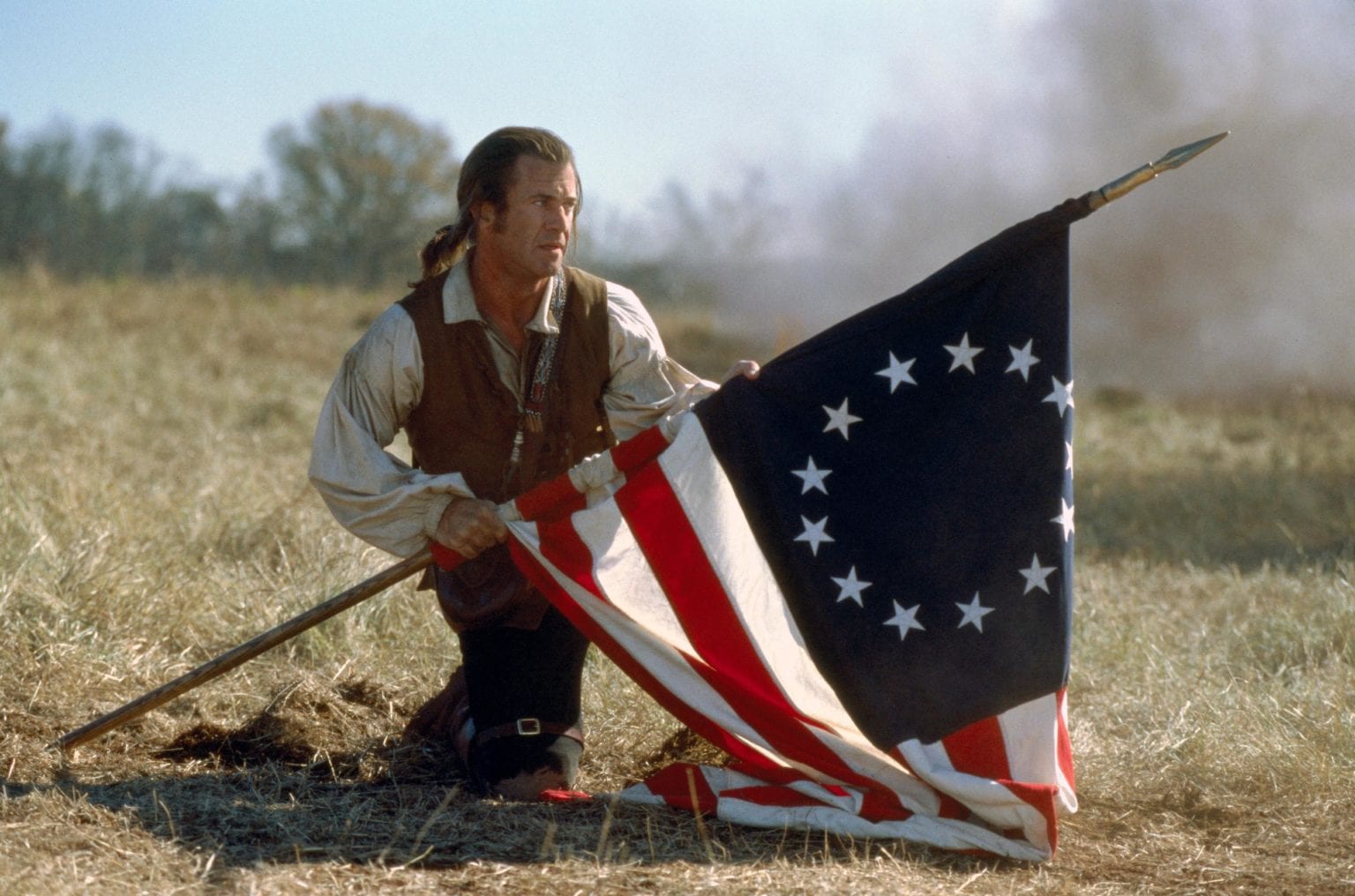 The Patriot is a wartime drama written by Robert Rodat, who wrote the screenplay for award-winning Saving Private Ryan.

Set against the backdrop of the American War of Independence, the film is about Benjamin Martin, a widowed Captain with seven children whose peaceful family life is disturbed by events that lead to the American Revolution.

Director Spike Lee slammed The Patriot and Mel Gibson for releasing a racist movie, for ignoring slavery with a “sanitized version of history which turns a discreet blind eye to slavery.”

Having previously fought in the French and Indian War, widower Benjamin Martin enjoys a peaceful life on a plantation with his seven children. When South Carolina joins the uprising against the British he tries to resist, desiring to continue an untroubled existence. But his eldest son, Gabriel, eagerly signs up against his wishes.

Gabriel, played by Heath Ledger, joins the Continental army against the British as a dispatch rider, but fast-forward two years we see him return home with war wounds after the British gain control of Charleston.

While Benjamin and his family are nursing battle-wounded soldiers from both the British and American side, the British Dragoons ambush the home and kidnap Gabriel with the intention of hanging him for spy activities.

During the struggle, Colonel William Tavington, played by Jason Isaacs, shoots and kills Gabriel’s brother Thomas in a rescue attempt before ordering Martin’s home be burned.

Martin and two of his other sons (who he arms with muskets) rescue Gabriel from the British unit, brutally killing many British soldiers with his tomahawk.

Driven by revenge, Martin is forced to desert his pacifist principles and resolves to join his son and returns to the Continental army.

Having gained a ruthless reputation during the French-Indian War, Benjamin is made Colonel and leads the guerilla army and son into battle against the tyranny of the British.

Benjamin is assigned the task of constraining Lord Cornwallis’ troops in the South. His guerilla troops are successful in disrupting the British lines of supply, and seize Cornwallis’s personal property and his two Great Danes.

Gabriel catches wind of the rumors about his father’s involvement during the French-Indian war. When pressed, Benjamin eventually reveals the remorse he experiences about the French soldiers he butchered for committing a barbaric crime against the British, hence his desire for a quiet life on the plantation.

Tavington learns the identity of militia members, attacking their families and burning their homes. Benjamin’s family escape and seek refuge in a settlement of ex-slaves. It is here that Gabriel marries his love Anne.

Anne becomes one of the townspeople who Tavington orders inside a church to be interrogated on the whereabouts of the militia. Believing they would be freed for the information, all of them (including Anne) perish when Tavington sets the church alight.

When they learn of the atrocity, Gabriel and other soldiers launch an attack on Tavington’s camp. Gabriel sustains a fatal injury in a standoff with Tavington and dies in Benjamin’s arms.

Martin loses his desire to battle further until he his reminded of his deceased son’s sense of duty on rediscovering an American flag he repaired.

He and his militia, along with Continental troops storm Cornwallis at the Battle of Cowpens ending in a fierce head-to-head between Martin and Cornwallis.

Cornwallis inflicts a serious wound to Martin who manages to drive a stake through his opponent’s heart and kills him. Cornwallis retreats after declaring the Continental victory.

Cornwallis finally surrenders to the Continental army and Benjamin returns home with his late wife’s sister, who is pregnant with his child. Members of his militia help to rebuild his family home.

Spike Lee And Other Criticism of Mel Gibson’s Patriot Film

Spike Lee, the “pre-eminent chronicler of black life in America” was the most vocal critic of Mel Gibson and The Patriot. In his letter, Lee wrote that he traveled to see the film with his wife on its opening weekend. “We both came out of the theatre fuming,” he claims. “For three hours The Patriot dodged around, skirted about or completely ignored slavery. How convenient… to have Mel Gibson’s character not be a slaveholder… The Patriot is pure, blatant American Hollywood propaganda. A complete whitewashing of history.”

There were also suggestions that Mel Gibson’s character was based on a slave-owning serial rapist that killed Indians for fun.

The protagonist role was originally offered to Harrison Ford, who declined because he found it “too violent” and that it simplified the American Revolution to one man’s grudge.

The movie was filmed in South Carolina and the unforms were designed with the assistance of the Smithsonian. Lots of attention was paid to detail with the exception of the truth. The film was nominated for three Academy Awards for Best Sound, Best Cinematography, and Best Original Score. If the movie were released today, I doubt it would have received any awards.

Previous ArticleA Review of The Da Vinci Code
Next Article The Dictator Review: Sacha Baron Cohen is Outrageously Offensive and We Love It

I’m sorry, but Spike Lee is nothing but a “race baiter”. His take on “The Patriot” is another fraud by the radical communist black faction. “The Patriot” is about a family caught up in the brutality of the Revolutionary War. It wasn’t about showing slavery. There was a Civil War 90 years later for that. Spike Lee should shut his own racist mouth, and take a jaundiced view of what the Democrats have done to blacks throughout American history from Southern Democrats creating the slave society in the South, when the North wanted to abolish slavery and the Democrats opposed it and started the Civil War in 1861. When the Democrats lost the Civil War, they started the KKK. Republican General and then President U.S. Grant had to send the Northern Army to squash the KKK. When the Republicans wanted to re-build the South under the Reconstruction Act, from 1865-1877, the Democrats opposed it until they got segregationist wording into the law, and reinstated slavery in the South. Democrat President Woodrow Wilson hated blacks and supported the KKK. President Franklin D. Roosevelt made programs under the “New Deal” during the Great Depression that helped white workers but not blacks. The Democrats opposed the 1964-65 Civil Rights Acts. When Republicans put the pressure on, they passed the laws. President Lyndon B. Johnson hated blacks and even said when he passed welfare laws under “The Great Society”, by giving them a little bit, “I’ll have them niggers voting Democratic for 200 years.” And, so it goes. Democrats have kept blacks ‘down on the plantation’ by giving them free or cheap housing in projects/ghettos/slums, welfare, food stamps, free or cheap health care under Medicaid and so forth.

Uh this movie was about the War for Independence not the Civil War so you and spike lee can stop crying. This movie rules and if you disagree you are probably a yellow toothed limey.

Lee is a liberal, and in today’s world, that means that he sees the world through a prism that emphasizes race to a degree that actually serves to minimalize true racism. Once everything is perceived as racism, nothing is. The Patriot doesn’t deny slavery existed…it merely assumes that the audience is aware of the phenomenon, and chooses not to dwell upon it. This makes perfect sense…a movie about the Revolution doesn’t need to focus on slavery. They treat the black slaves the same way they treat other peripheral groups….they are noted, but not emphasized. Along with the token black, there was a token Frenchman, a token Loyalist, a token clergyman, etc. In fact, you could make a good case that the Loyalists were depicted with less accuracy than any other group. The film centers its’ brutality on Tavington, the British cavalry officer, while it was often the Loyalists and Indians who perpetrated the most barbaric offenses upon the rebels. But the fact that Spike Lee hates the film is irrelevant. The symbols that permeate the narrative…guns, crosses, and flags…are as fully beloved by quality traditionalists as they are loathed by intellectual pygmies like Lee. Face it, this was never going to be his kind of movie. (Next he’ll be claiming to hate Rocky 4!)

The movie actually had some technical and continuity errors as well as cinematography gaffes here and there (a camera visible in a couple scenes, etc…) but historically it was actually quite accurate. And it was a moving and visually spectacular film which accurately conveyed many of the key ideas of the revolution and recreated the realistic feeling of life in the early colonies. Martin was actually NOT a slave holder, as the overwhelming majority of American colonists were not slave holders either. The movie was not about slavery and neither was the founding of America or the American Revolution about slavery. Slavery was just one minor aspect of one limited region of a group of small upstart colonies that were plagued at the time with a great many issues—most of which were much more pressing and pervasive than slavery was at the time. Slavery is overstated and overrated as an issue in today’s “woke” and historically illiterate American society. Also, slavery was basically the way of the world at that time —and the young, upstart American Colonies and Great Britain were the first two nations to eradicate the terrible practice of slavery. In fact, the Declaration of Independence and the subsequent Constitution were written to explicitly lay out the road map to eliminate slavery. The constitution was a compromise which was grudgingly signed by the founders as a temporary coming together with a clear understanding that slavery was abhorrent and would be eventually eradicated. The idea was to stick together and form a government and a coherent national First, and then work out the other issues and problems, including slavery. Spike Lee is apparently ignorant of this history or he chooses to ignore it to make a false and misleading political point. Either way, Lee needs to grow up, do some homework and learn American history. His deliberate black victimhood and victimology is irritating and harmful, and it generates racial animosity where none need exist today. The movie deserved the awards it won—and if it is true that it would not receive those awards in today’s “woke” America, then this is grossly ignorant and historically illiterate nation now.