What The Hell Is Wrong With Trump Supporters?

I always wanted to write this article about “Trump Supporters” but never had the nerve. I know I will probably lose some of my pro-Trump readers but I feel the need to put this out there. Many experts have been left baffled by the absolute loyalty of Trump Supporters. Any treatment of Donald Trump needs to also examine his supporters, devoted and admiring in equal measure. Some have looked to the field of psychology to harness quantitative data explaining how and why Trump’s supporters are so uniquely loyal.

While it’s unfair to suggest that all of Trump’s supporters harbor prejudices against religious and ethnic minorities, many do. The Republican party has appealed to bigots since the times of Nixon and his “southern strategy”. Trump’s speeches are no less subtle. He frequently and openly appeals to bigoted supporters when he starts calling Muslims dangerous and Mexican immigrants murderers and rapists.

SDO (social dominance orientation) is related to authoritarian personality syndrome. People with SDO prefer a hierarchical structure of groups, with high-status groups dominating lower-status groups. Dominant, hard-headed, and motivated by self-interest, Trump’s speeches appeal to those with SDO by repeatedly differentiating between whites and minorities. A 2016 study of published in Personality and Individual Differences found that those scoring high for SDO and authoritarianism intended to vote for Trump.

Intergroup contact has been proven to reduce prejudice. Many of Trump’s white supporters have much less contact with minorities than other Americans.

Relative deprivation expresses how deprived people feel at not having what they feel entitled to compared to the experiences of those they feel less entitled to. This deprivation is relative because it hinged on a skewed perception of reality. We can take as an example the media portrayal of Trump supporters as working-class people rebelling against the Republican elite. 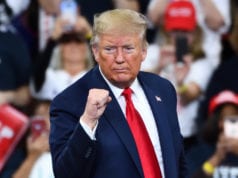 Trump’s Billionaire Backers Are Still With Him